I am a fan of the camera Holga. Holga is a very cheap plastic camera that has many good predicates, but is mostly known for its weaknesses like distortion, light leaks, blurs and vignetting. In fact, if you use the camera in order to get good pictures it is sometimes difficult to say that it was made with a Holga. But if you have another camera and it is used without care, you may produce holgographies too. I appreciate these typical Holga photos but personaly I prefere to produce normal pictures with a Holga, it is more challenging, I think Of course, not using all the lomographic 10 rules.

Let as start with the optical distortions. Holga has, ordinary, a plastic single lens. This lens produce funny pictures were colors are decomposed at the edges of the objects photographed. Besides, straight lines are curved, any spheric simple lens produce this effect too. How to make photos without these problems. Holga offers a version with glas lens. These lens don't decompose the light like the plastic ones. On the other hand if we only use the portion of the image in the center of the frame, spherical aberration is much smaller. This is only convenient if the image is big enough, so I advise you to use a 120 version of Holga, the Holga GN that may be new as cheap as 26 dollars. It is the price worth. OK, if you are going to use only the central part of the image, you may reduce the size of the frame like this, for instance: 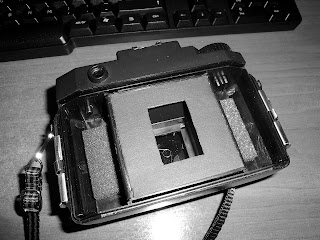