Following the past of photography

The first successful photographic processes used metal or paper as base for the negative image that resulted directly from the exposure of their surfaces to light. On the case of the daguerreotypes, the positive was a result of the mirror effect of the negative image on the copper silver plated surface. The copper was polished until you could see your face reflected on it and then plated with a very thin silver layer which was then sensitized by exposition in darkness to iodine vapours. The sensitized plate was exposed for some few minutes to light and developed with mercury vapours or, latter, with the Becquerel method of exposition to sun light through a red filter. I don't know much about Talbot's methode but it used paper for the negative, like we can read here. And John Herschel made the first transparent negative on glass as early as 1839 but its general usage started some time latter on the 1850's. The first transparent plastic film was produced in 1889.

What I want to say is that transparent negative film is an invention that follows the opaque bases for negatives, metal or paper. Even the first flexible photographic roll film made by Eastman Kodak in 1885, was actually coated on paper.

The need of transparent bases for the negative was primarily to allow reproduction by the same methode used for the negative. A paper negative, due to the structure of the paper, gives worst positives than those made with a transparent support. This is more or less obvious. What is difficult to understand is that film remained a standard until today, even tought that the reproduction techniques such as normal scanners are not conceived to give good and fast reproductions of a transparency. They can reproduce paper prints and daguerreotypes much better than transparencies.

The photos below were made with a bellows camera made by my self, using a lens from a cheap binocular, on Ilford paper, Multigrade IV brilliant. Exposisions between 10 and 30 seconds at a 20 W fluorescent light at home. No shutter, just a cover which is removed and placed back manually. 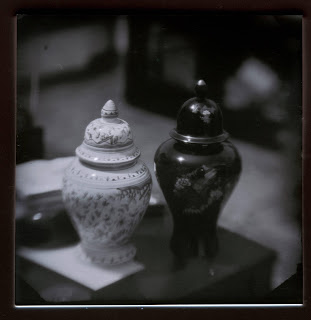 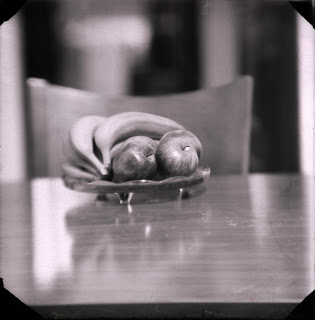 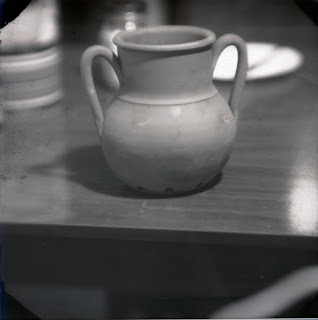 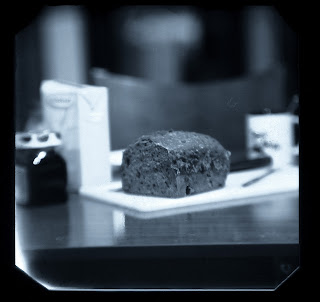 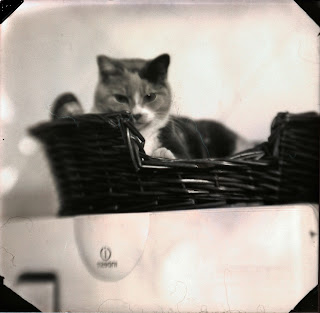 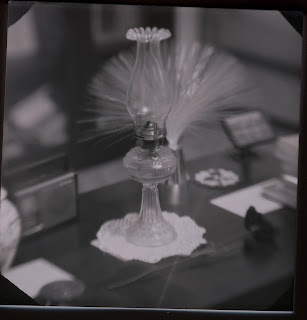 The paper has some advantages over film. It is less delicate, can be handled without extreme care. It does not attract dust as easily as film. It is also more resistent and can be archived in shoeboxes or in albuns. I think that it would be a great thing if some manufacturer offers 'paper film' at least in medium format.  The paper should be thinner than the regular photo paper and can do more photos than the film because it will consist on just paper and not paper + film like the 120 rolls.
Publicada por H. Sousa à(s) 7:13 AM No comments:

Paper roll film, why not ?

«Early photography in the form of daguerreotypes did not use film at all. The light-sensitive chemicals were formed on the surface of a silver-plated copper sheet. Beginning in the 1850s, thin glass plates coated with photographic emulsion became the standard medium. Although fragile and heavy, the glass used for photographic plates was of better optical quality than early transparent plastics and was, at least at first, less expensive. The plates continued to be used long after the introduction of film, and are still manufactured for scientific use. Eastman Kodak marketed the first flexible photographic roll film in 1885, but this original "film" was actually coated on paper. After exposure, as part of the processing, the image-bearing layer was stripped from the paper base and transferred to a glass support to facilitate printing from it. »

The need of a transparent support for negatives is not necessary anymore, since scanners can reproduce images by reflection and the negatives can be inverted by means of software. In some of my uncontrolled experiments I also obtained positive images instead of negative and I could scan the film reflexive, instead of transparency. Now that I am involved with large format, I am using paper for the negatives and they are very easy to handle and store, not so fragile like film. There is also a direct positive paper that is used mainly for pinhole photography, a product from of the Ilford house, very expensive by the way.

It is possible that some day, we will have film manufactures offering paper film, 35 mm, 120 and so on. For the very small formats like APS or 110 it may not have the same detail as transparent films but for 120 film and maybe 35mm it can work very well. I will be trying the next with 6x6 cameras using paper as negative. Below you find two pictures, both shot with a 9x12 camera using Ilford Multigrade IV Paper as negative and scanned reflexive and inverted via software. The Ilford paper was used as ISO 25 in the first picture. In the second photo I don't know, it was exposed with fluorescent light (20W) during 30 sec. at f/5.6. It is underexposed, giving this black/blue when inverted and thus the daguerreotype look enhanced with finger prints during development.

Last weekend I travelled to Oporto, a town in the North of Portugal to meet someone who offered me an old camera he got from the parents and manufactured about the 1926. It is a nice piece from the house Zeiss-Ikon, in very good working condition, 9x12cm plate size. And it costs me just a 'thank you'. Ok, I had to pay the train and taxi to get to the person's house, but a lot less than the same piece costs at ebay, I already searched a similar one. It has a 135mm lens on a Compur shutter that works like a clock. A german clock.


I bought some photo paper of the size 13x18, I cut it to 9x13 and feed into the plate holder that came with the camera. The picture above was made at 1/50 s and f/11. This means that the photo paper must be considered as having as much as 25 ASA because at f/16, the speed would be 1/25 (the f/16 rule). I was a little surprised with this, never expected that high but it is like this. I was thinking about purchasing film but I don't need anymore if the paper is that sensible. Increasing speed to 1/100 s allows the use of f/8 or larger for less iluminated scenes. At this speed no tripod is needed. Difficult is to get the image foccused, every small difference is important. The marks of distance on the camera don't give a sharp image, I had to use a ground glass and a magnifying lens to achieve a more or less sharp image. But can be better, I think. Next time, I hope. I need more practice.

The paper was developed in 1+10 dilluted parodinal made with paracetamol, sodium metabissulfite and sodium hydroxide. Development takes 2 minutes only. Fixer of sodium thiosulfate. The sepia tone was given by the software used.

A new 2-bath developer for black and white film

Discussing a topic at the Flickr group «The new Caffenol Home and Other fun of Alchemy», the member Giorgio suggested a 2-bath developer where the first bath was a mix of parodinal and vitamine C and the second bath the alkali borax. I started trying and came to the conclusion that the following recipe works very well and I am using the same bath A since one month now. 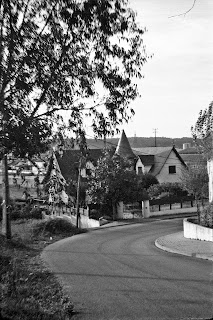 PS - This recipe will be added to my collection of experimented recipes here.
Publicada por H. Sousa à(s) 3:11 AM No comments: