The blog is my diary, but not disposable.

The blog is where I speak to myself, but I don't keep it secret, I have nothing to hide.

I have bought, at a chinese shop, very cheap disposable cameras. They are covered with a paper mask and, taking the mask away, I could see that it was recycled in fact. So, the chinese take our garbage, they recycle it and sell it again to us.

The first time I used a disposable camera, I was surprised by the quality. Ok, it is not the non plus ultra but very acceptable in what sharpness is concerned and they are, in general, very wide angle. Since then I use these cameras to expose the films I want to develop in a new experimental developer.

Last Christmas I went to USA to visit two brothers of mine and their children and grand children. I took only a small digital camera with me, thinking that maybe I could use a film camera I bought at ebay and gave the address of my older brother living in USA. But it was only the body of a Leica R3 and it was not possible, in so short time, to get a lens for it. So, I decided to buy two disposable cameras of the brand Fujifilm to take some film pictures. But it was not a good choice, all the pictures taken with flash were underexposed, the flash was, maybe, not well synchronized with the oppening of the shutter. Well, this was not really a problem because the digital did took almost the same family pictures too.

But in one of the roll films there were some pictures I took at the Brown University, in Providence, at daylight. I don't know whether I will succeed to reproduce this result, but the color film of Fuji, developed in Dignan's 2-bath developer, gave almost black and white pictures. I don't know what caused this, if it was the film or the developer. For the second developer bath I used not only 5% soda + 0.5% bromide but a already used Caffenol Strong work solution which is the same 5% soda + 0.5% bromide plus 1% Caffenol Strong.

I would say, the second picture is better than the first. So, here are some other of the same roll, scanned as B&W pictures. The color version is much inferior. 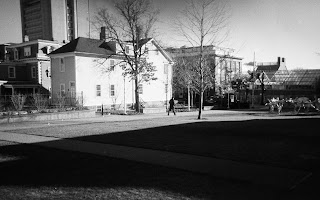 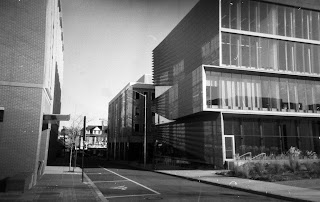 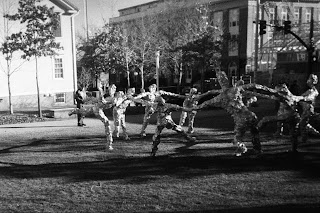 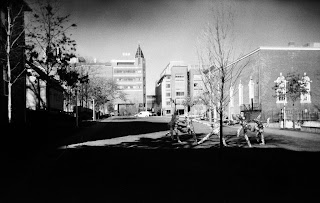 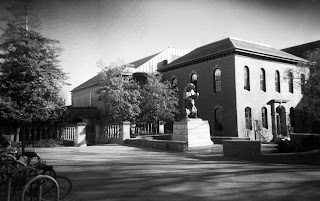 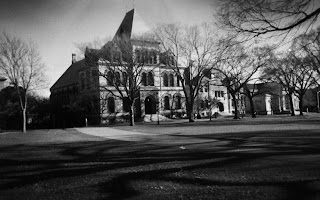 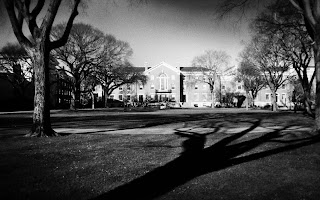 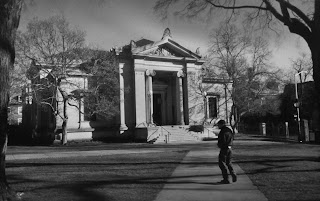 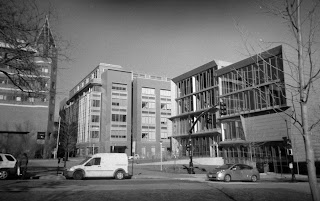 Some people is using color C41 films cross-processed in B&W. This means that they bypass the Bleach bath, which gives very foggy negatives. Here, in this (new?) method, the film was bleached as normal color negative. The only difference with C41 is that Caffenol Strong was present in the second developer bath. Npw I have to repeat the experience with another film to be sure that the process works the same way.
Publicada por H. Sousa à(s) 3:09 AM