To make a B&W developer from scratch is today very easy. You may use coffee, tea, potatos, wine and so on, all of them can develop silver. But color is very difficult because you need a substance that developing silver produces the right stuff that combined with the dye couplers on the film will generate the dyes. For C-41, the right stuff is CD4 (a complex derivative of PPD, paraphenylenediamine). Ok, other derivatives like CD1, CD2, CD3, will also develope and also PPD alone does it like a friend of this blog did some time ago and shared with us. He offered me to send some PPD but I didn't take the chance because it is also a special stuff and my goal is to use a common stuff like coffee is used for B&W.

Unfortunately there aren't common substances with those potential color developers, one of the only ones are some hair dyes containing PPD. Some people have already tried it, but only a few had some success. I have been trying this for a long time but I couldn't realy get an acceptable result, until today. I also tried para-aminophenol, aka paracetamol, reported also as a weak color developer with tenuous results.

Today, because the wether is bad for walking, I decided to try again with hair dye, following partly the experience of Robert (neelin) . I loaded a piece of film in a camera and from my balcony I made some 6 shots to several directions.

Then I prepared a «soup» containing hair dye and developed the piece of film for 1 hour at more or less 37ºC (100ºF) in my kitchen sink. OK, not only a time, it was the third attempt. I first used 15 min. at room temperature, then 30 minutes at room temperature and finally full one hour at 37ºC. 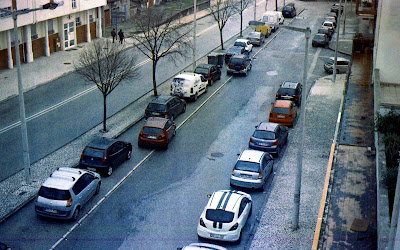 And my recipe was this one:

The film looked like a B&W one but at scanning I saturated the colors and also with software afterwoods.

Note: The only special stuff I used was Phenidone like suggested here, and I still don't know if it goes without it. I will try it later because it is important that the developer is realy made from scratch.
_________________________
10-2-2016
Update: I did another modification, without phenidone and without Potassium Bromide. Yes, it works too, I will be publishing the results very soon. So, the recipe is now as follows:

It works much faster, I only needed 20 minutes to develop. I think this is because it has no Potassium Bromide which is a restrainer. But I couldn't see differences until now. Maybe with KBr you get sharper images but this is not a problem for who just want to use common substances and KBr is, somehow special. Maybe salt, Sodium Chloride may be used instead.

I used KBr in my mix because "normal" colour neg developer has it.
You can also make Sodium Carbonate by "frying" Sodium Bicarbonate in a frypan until it bubbles off, leaving only Sodium Carbonate (wear a dust mask or don't breath as it atomizes some powdered Sodium Carbonate/Bicarbonate).
Also, mixing Sodium Hydroxide & Sodium Metabisulfite in the same mix yields Sodium Sulfite. Locally the two latter chemicals are off the shelf, but Sodium Sulfite is not.

Be very welcome, Robert! You inspired me!
Yes, it is right what you say, of course! But I only add Metabisulfite at the end, after the sodium hydroxide has reacted with Bicarbonate. So, I hope it will preserve the bath by itself and not becoming sulfite. But only the time will tell how long it lasts. This all very new, many questions are still in the air. Does sodium hydroxide produces something like CD4 when added first to hair dye? The fact is all my 3 batchs woirked well, without any surprises like before when using carbonate directly.
Any insights are welcome! But I am very glad with the results so far!