It is very easy to make a pinhole camera. But if we want to make a film camera with scars means, the more complicated part is, obviously, the shutter. I already made some rudimentary shutters using rubbers, wood and aluminum plates, without a concrete project. There are several types of shutters, see here. First of all I wanted to make a simple one, and this time I decided to plan it more in detail. 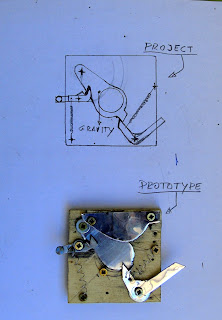 It is a single leaf shutter with 3 mouvable partes. The leaf, the catch mecanism that keeps the leaf covering the hole and the trigger that will push the leaf when it is released by the catch.

It uses two springs that I took from used ballpoint pens. Afer finishing the project I realized that another piece was needed to keep the leaf close to the square wooden base, whose dimensions are 5,7 x 5,7 cm. Also the hole resulted a little too large, due to the file I used to enlarge it, after drilling a a smaller hole with a home driller.

The next time, I will know more about these problems and maybe it will work better.